The story behind The Spyglass File

Not exactly prolific at these blog things, am I...? You’d think that I’d be better at it, what with being a writer and all! Anyway, here's blog number three. It's about the inspiration behind my latest book, TheSpyglass File. You might want to stop reading if a) what you've already read here is too exciting for you or b) you've yet to read The Spyglass File – and, if that's the case, then what are you waiting for—go ahead and read it, then come back here!

So, The Spyglass File... I've been fascinated by WW2 since I was very young. I'm not quite sure where this interest came from, but it led to my writing two non-fiction books—Hastings at War (2005) and Hastings Wartime Memories and Photographs (2008) - both available from Amazon. These books looked at the minutiae of life in a Sussex seaside town and how it affected the lives of normal citizens. Part of the research process for these two books involved interviewing dozens of men and women who had lived through this period and who shared with me such varied memories: happy events, funny anecdotes, strange stories and many recollections of the death and destruction brought into their lives. This gave me a good insight into the realities of living through the Second World War; I knew whilst writing The America Ground (the prequel to The Spyglass File) that I wanted the next book to be set during this period.

What happened next was rather strange…just as a potential story thread that I had been pursuing fell apart, so another was dropped into my lap. On the 10th July 2015 I discovered that I had an aunt — an older sister to my father - who was born in secrecy in the midst of the Second World War. We met fifteen days later; a bewildering and yet wonderful experience. I could, however, have happily kicked myself for not having found her years ago whilst my father was still alive. I started researching my Goodwin tree in 1998, but never thought to run such a basic search in the indexes for children born to my grandparents; there was my dad and two younger sisters—that was the way it had always been as far as the family was concerned, so why would I have bothered to double-check more widely? But actually, sitting in the birth registers for the June quarter of 1943 was another sibling born to my grandmother whilst my grandfather was captive as a prisoner-of-war. This is the basis of the inspiration for The Spyglass File.

Joyce Gingell, a twenty-year-old machinist married my grandfather, Albert Leslie Goodwin on the 22nd December 1940 in St John’s Church, Kensal Green, London. Albert was a twenty-three-year-old soldier, who had enlisted in the Royal Army Service Corps in March of that year.

The marriage of Albert Leslie Goodwin and Joyce Avis Gingell

Having completed a short period in St Nazaire, on the 12th July 1940 he was posted to 292 company as a driver. On the 29th October 1941, Albert and the rest of 292 Company embarked for services overseas. He was posted to 54 Infantry Brigade on the 6th January 1942 and the Brigade left Singapore the same day, becoming embroiled in the disastrous Fall of Singapore. He, along with 80,000 other men were part of the largest ever surrender in British military history on the 15th February 1942 when the Japanese army conquered Malaya and then Singapore. One month later, Joyce was informed that her husband was missing in action. She received no further information, not even whether or not he was still alive.

At some point around the end of June 1942, Joyce met a man—purportedly named Henry Francis Rowe—an electrician from Burton-upon-Trent at a dance. The result of this liaison was that Joyce became pregnant with this man’s baby. One can only speculate as to the state of her mind during these turbulent years of war, and not knowing whether her husband was dead or alive must only have compounded the matter.

From the records available, it seems that between Joyce and her parents, the decision was made that, as soon as the baby was born, it was to be adopted. Later that year, her father wrote, ‘I am anxious to clear this matter up as soon as possible…’ At some stage during the pregnancy, Joyce was removed far from her home in London to an address in Nottingham. The house was owned by a widow, one Kate Buxton, who intriguingly shares the same surname as Joyce’s grandmother, although I have yet to find a connection between the two women.

Just ten days prior to giving birth, Joyce received official notification that her husband, Albert was indeed alive and was a prisoner-of-war in Japanese hands. 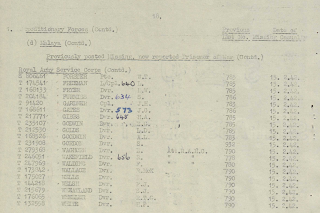 On the 24th March 1943, Joyce gave birth to a healthy baby girl weighing 7 ¾ pounds. Joyce registered the birth of her daughter on 9th April 1943, naming her daughter Valerie. The process of adoption began in Nottingham soon afterwards. However, the process faltered as Joyce had erroneously noted Albert Leslie Goodwin as the father of the baby and, on the 26th August 1943, accompanied by her father, she was forced to return to the register office and have the certificate amended. 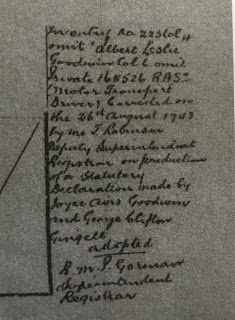 With Albert’s details removed from the birth certificate, the adoption process continued. Joyce returned to London with the baby, living in the Salvation Army Eventide Home in Denmark Hill. Finally, in what must have been an agonising eight months for Joyce, the adoption went through and the baby was handed over to a childless couple from Nottingham.

As far as the family is aware, the baby was never spoken of again and it is assumed that Joyce returned home, never telling Albert about the baby. His prisoner of war camp in Thailand was liberated by the allies in 20th September 1945 and he was repatriated back to England on the 12th October—three and a half years after having been captured. He was awarded the 1939-45 Star, the Pacific Star and the War Medal 1939-45.

Albert died in 1971. In 2001, Joyce received compensation on Albert’s behalf for the privations suffered during his internment. She died in April 2006. The long process of Valerie — Pauline under her new name — discovering the circumstances of her birth began less than five months after Joyce’s death in September 2006, when she was unable to locate herself in the birth register indexes; the following year it was confirmed to her that she had been adopted.

If you have already read The Spyglass File you will have noticed the parallels that run between Joyce’s life and those of the main character in the book, Elsie Finch. Although there are similarities between the two women, I deliberately did not want to try and retell Joyce’s story. Elsie and her role in the WAAF were based upon a great deal of research into the vital work that these women undertook listening, transcribing, translating and decoding communications between the Luftwaffe pilots who flew over the south coast of Kent. 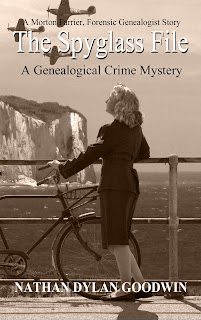 Click here for further information on The Spyglass File


Posted by Nathan Dylan Goodwin at 01:59