Well, here I am making an appearance in the world of blogging!  I had originally intended to create a newsletter to keep Morton fans up-to-date with his latest goings on, but I've opted for blogging instead, as I think it has a much greater potential for interaction and spontaneity. Let's see how it goes...

So yesterday saw the Kindle launch of my latest book in the Forensic Genealogist series! The America Ground, like the other books in the series, shifts between the present day and a past narrative, which in the case of this book, is set in 1820s Hastings, Sussex. 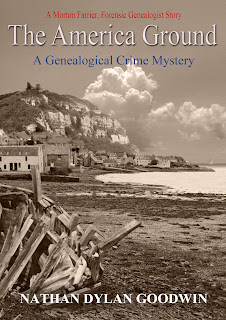 The front cover of The America Ground, designed by Patrick Dengate

I loved writing this book for many reasons. First of all, it was great being back with Morton - I find him very easy to write now; he's a bit of an old friend! I think he'll make the good subject of a future blog! It's a huge cliche, I know, but when I'm writing I am always genuinely surprised at how the characters come to life and do / say things that I didn't expect!

I've had a long fascination with the real story of the America Ground (again, another future blog!) and, whilst I was writing The Lost Ancestor, felt that there was a strong story begging to be written. The past narrative chapters were the most challenging I have yet written as the style of speech and language used back then was obviously very different to today.  I also wanted to include snippets from the wonderful old Sussex dialect in the book, which presented a bit of a challenge as I didn't want to include a glossary (I think that would have been rather irritating!), so I settled on only using words where the context could be derived from the whole sentence. Hopefully readers don't find the words too annoying! But then, who could find 'Butter my wig!' as a surprised exclamation at all annoying?!

The sub-narrative of Morton's origins builds from the previous books. I won't give too much away, but let's just say that his story moves on...


Posted by Nathan Dylan Goodwin at 03:54